gofan.co. Tickets will also be available at the gate on game day beginning at 5:00 p.m. All Veterans, active duty and first responders get into the game free and can enter Thirlby Field at the 13th Street rolling gate or through the 14th Street main entry. Gates open at 5:30 p.m.

The Patriot Game takes the annual football clash between the TC West Titans and TC Central Trojans and combines a focus to honor Veterans, first responders, active-duty military and area heroes who have died while serving our country. Each year, Student Senate members from both schools determine a beneficiary of the event. Proceeds from this year's t-shirt sales will support Reining Liberty Ranch, which offers community based programs that serve Veterans, their families, and other disabled/at-risk individuals within the Grand Traverse Community.

This year, Titan supporters will wear red shirts while supporters of the Trojans will wear blue. The minimum shirt donation is $10. Commemorative t-shirts are available for student sales September 13-16 during lunch.

The public can purchase shirts outside both schools at specific time periods. Traverse City West fans can purchase shirts on the east side lawn by the school’s main entrance from 11:30 a.m. to 1:00 p.m. through Thursday. TC Central fans can get their shirts outside of the gymnasium from 7:30 a.m. to 8:00 a.m. through Friday.  Any remaining shirts will be sold at the game.

About the TC Patriot Game

The TC Patriot Game is bigger than football

Take the biggest cross-town high school football rivalry in northern Michigan, add an event that honors active duty military, Veterans, first responders, and those from northern Michigan who recently died serving their country – and you have a game that attracts over 10,000 enthusiastic fans.

The TC Patriot Game invites active duty military, Veterans and first responders onto the field in a pre-game ceremony that honors their service and sacrifice. The names of those who have been killed in action are solemnly read aloud.

This game began as a way to teach students and the community that men and women from northern Michigan are making a sacrifice every day to protect the freedoms that we enjoy.

Through the sale of commemorative t-shirts, students help to raise money to support a Veteran organization that works in northern Michigan. Student Senators from both schools (Traverse City Central High School and Traverse City West Senior High School) interview a variety of Veteran groups and select one that will receive the proceeds. The group selected for the 2021 Patriot Game is

Active duty military, Veterans and first responders can attend the game for free.

The annual TC Patriot Game has raised thousands of dollars for area Veterans groups including:

One of the students’ most treasured keepsakes from the game each year is a commemorative TC Patriot Game t-shirt. Students love to wear their red or blue shirt to show their team spirit and show respect for those who sacrifice so much, or all, for others. This year, the Titan fans will wear red shirts; the Trojan fans will wear blue shirts.

TC West
T-shirts are $10 dollars: student senate will sell shirts at all 3 lunches for students and outside for community members on the East side lawn by the main entrance at WSH from 11:30 a.m.  to 1:00 p.m..  Monday - Thursday.

TC Central
T-shirts are $10 dollars: student senate will sell shirts at all 3 lunches for students and outside for community members by the gym entrance at CHS from 7:30 a.m. to 8:00 a.m. Monday - Friday. 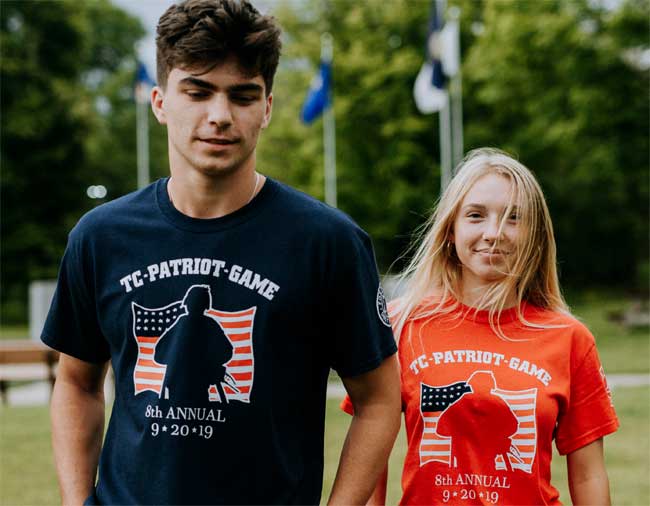 Veterans, active military and first responders get in free.  Please use the rolling gate off 13th street for entry.  Please plan on joining us on the field at 6:45 p.m. in the East endzone for a short recognition ceremony, honor guard and national anthem from the TC West marching band.