“We are incredibly proud of the hard work our high school staff and students put into teaching and learning every day. It is that hard work which allows our high schools to be ranked among our state and nation’s best,” said Paul Soma, superintendent of Traverse City Area Public Schools. “We also know that preparation for success in high school begins long before the freshman year, so the successes in our high schools also reflect the excellence in our elementary and middle schools, and speak to the overall quality of our entire school system. I have been so proud to serve as superintendent of this wonderful district for the last five years.”

The U.S. News and World Report “Best High Schools” rankings identify the country's top-performing public high schools. The goal of the rankings is to provide a clear, unbiased picture of how well public schools serve all of their students – from the highest to lowest achieving – in preparing them to demonstrate proficiency in basic skills as well as readiness for college-level work.

In addition, both high schools received honors in this year’s Bridge Magazine Academic State Champs rankings. Over a three year period, Traverse City West Senior High School had an average of 73.3 percent of graduates enrolled in a two or four-year college or university and Traverse City Central High School had an average of 71.5 percent. In rankings by geography, TC West was 2nd and TC Central was ranked 4th among 26 schools in northwest Michigan.

Bridge Magazine analyzed data from more than 580 high schools and recognized a total of 40 schools. The rankings compared students from similar economic backgrounds, because research has consistently shown that economic challenges are a barrier to academic success and college. Overall, Michigan high schools sent an average of 63 percent of graduates onto two-year or four-year colleges or universities. 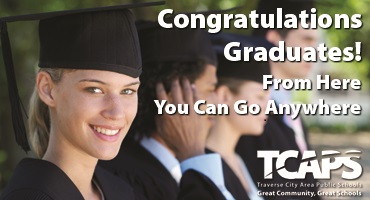 Prepared for the Future